Malcolm Turnbull and the distraction of economic growth – Independent Australia 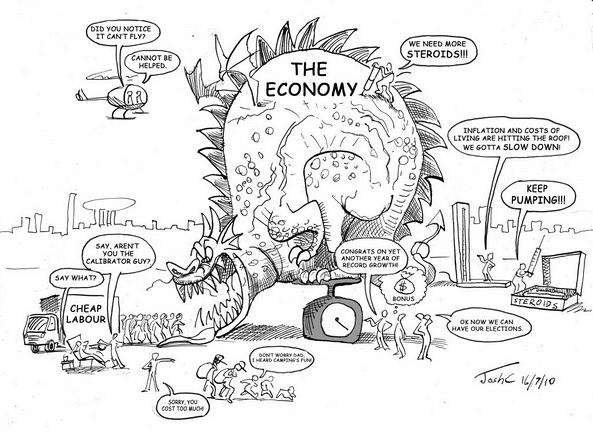 WHY ARE WE so consumed by the pursuit of economic growth?

Malcolm Turnbull made the economy the primary focus of both his pitch for leadership of the Liberal party and his victory speech. It was a smart move because, under Abbott and Hockey, almost everyone was questioning that age-old belief that the Coalition are the better economic managers.

Economic measures have become the principal indicators of success or failure of governments. They shouldn’t be, but they are.

Economic theory holds growth to be desirable for two major reasons. The first is that the more money an individual has, the more of their preferences they can satisfy; that is, they can get more of what they want. This preference satisfaction is the very definition of human welfare, according to economic theory.

The second reason that economic theory holds growth to be desirable is employment. Almost any increase in efficiency must be accompanied by economic growth if employment levels are to be maintained. To take an example: supermarkets will eventually have no staff at checkouts, either through technology that automatically registers all items or, as is already happening, by passing the cost over to the customer in self-service aisles. The supermarket saves money and can increase profits and discount prices. If checkout staff find alternative work without displacing other workers, the economy grows because more work is being done than before.

Similarly, if we have net migration above zero – more people coming into the country than leaving it – then we need a growing economy in order to provide them all with jobs.

So, economic growth creates jobs — most of the time.

The problem with both of the above justifications for the pursuit of economic growth (preference satisfaction and employment) is that they are indirect ways to achieve their stated goals.

Economic growth is a worthy pursuit for Turnbull, but he won’t be able to ignore inequality | Mike Steketee http://t.co/0nSsRz9yvr

Preference satisfaction is a very crass and imperfect proxy for human welfare. While there’s no doubt that those in extreme poverty benefit enormously from additional wealth, the effect diminishes as we get wealthier. Research has shown that you pretty much have the same impact on any person’s self-reported wellbeing by doubling their income. In other words, you can get the same increase in overall wellbeing by spending $20,000 to double the income of a poor person (in Australia), or $200,000 doubling the income of a wealthy person.

If human welfare is our main concern, then it’s clear from the data that, in wealthy countries, the distribution of wealth and income is far more important than simple measures of overall economic growth. It’s possible for the economy to grow while income and wealth at the bottom of the distribution stagnates or even declines. Since the financial crisis in 2008, a staggering 95% of income growth in the United States has gone to the top 1% of income earners. A growing economy but a stagnating middle and lower class.

Similarly, if employment is a major concern, then employment should be directly targeted rather than assuming that economic growth will take care of it. In the post-war period of the 20th century most developed nations had full employment policies. Australia’s unemployment through the 1950s and 60’s averaged about 2%. Economic reforms in the 1970s and 80s that are credited with fostering 25 years of uninterrupted economic growth also lifted what we viewed as an acceptable level of unemployment to around 5% and actual unemployment often significantly higher than that.

It is important that we understand that this is a policy choice. If we so chose to, we could return to an unemployment rate of 2%. There are many paths to full employment including a full-blown job guarantee policy. Under such a scheme the Federal Government could act as employer of last resort. In other words they would give a job – at or maybe just below the minimum wage – to anyone who wanted one. The impact would be not only to eliminate involuntary unemployment, but also to make the economy more robust and flatten out the boom and bust of the business cycle.

We know a job guarantee could work and it would be much more effective than just targeting growth and then crossing our fingers.

Let the private sector obsess over growth if that’s what they want. The public sector should focus on the public.

Warwick Smith is a research economist at the University of Melbourne. He will be running a workshop discussing these issues and more at the Local Lives Global Matters conference in Castlemaine, Victoria, from 16 to 18 October. You can follow Warwick on Twitter @recoeco.