This article was first published at Independent Australia. 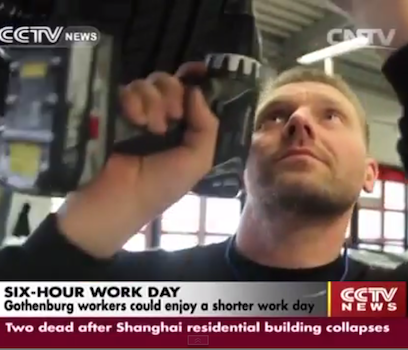 Screen shot of report by CCTV News on Gothenburg trial

The Abbott Government wants us to work more but who really benefits? Economist Warwick Smith argues that instead of handing more of our money over to the big four banks, we should follow the Swedish example where a 30 hour working week barely caused a blip in overall productivity.

ABBOTT AND Hockey’s 2015 budget continues their efforts to increase “workforce participation”. This is just another way of saying they want Australians to work more. Why? We’re told it’s to repair the budget and to maintain economic growth in the face of an aging population.

They are pursuing increased participation on multiple fronts including assaults on penalty rates, increasing childcare support, punitive measures against the unemployed and reduced family payments.

Whether or not we want to work more is not of interest to the government but we should be asking ourselves this question because there are alternatives to increasing participation.

“For those families, the decision to go back to work isn’t a choice, it’s a necessity.”

Government policy can help from multiple directions. We can do as Abbott and Hockey are doing and make returning to full time work for both parents easier by making it financially more attractive.

Alternatively, government policy could improve housing affordability so that parents have the choice to stay at home with their kids or go to work and still be able to afford childcare. The latter option is not under consideration by the government.

Current government policy artificially raises the cost of housing by allowing negative gearing and the concessional tax treatment of capital gains. These policies make housing investment more profitable, increasing investment and raising prices. This effectively hands a greater proportion of wages over to the financial sector through interest payments or rent; wages that could be used to pay for childcare if that was what we wanted.

The government pretends to help us through childcare rebates but actually all they’re doing is assisting us to work more so that we can afford to pay for housing that government policy has made ludicrously expensive.

We live in one of the wealthiest countries in the world at the wealthiest time in human history. We should be thinking carefully about what we want to do with this opulence but instead we are just unthinkingly handing more and more of it over to the financial sector (primarily the big four banks). We could be using it to work less. That’s right, work less. We could mandate a standard 30 hour work week and six hour work day as they are trialling in Gothenburg in Sweden. There is growing evidence that overall productivity would barely fall as people working shorter days are more productive.

There are no fundamental economic barriers to doing this. We can afford it if we agree that it’s more important than ever-increasing home prices and ever-escalating material consumption. Actually, all we’d have to do is stall those things briefly in order to have six hour work days. 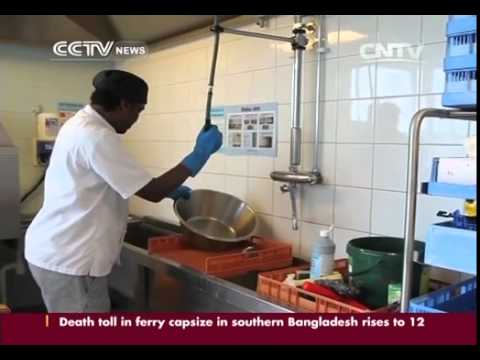 But what about the need to address government debt and the never-ending budget deficits? This is another constructed crisis. As Richard Denniss of The Australia Institute points out, the government’s Intergenerational Report constructs the long-term budget crisis by making the assumption that we will regularly cut taxes in order to maintain a tax to GDP ratio of 23.9 per cent.

If we did not do that we would easily have sufficient taxation to allow for expenditure on aged pensions, Medicare, Denticare, disability insurance, Gonski etc., etc. as well as being materially better off as individuals. Yes, we could do with tax reform so that less of the tax falls on individual incomes and more on economic rent but that is mere administrative detail in the context of our great opulence. There is no crisis here. As a nation we have never been so wealthy.

So, in the absence of a crisis, what do we really want in terms of a future economy? Seems to me that a six hour work day is a terrific goal. There are obviously higher priority goals in terms of social justice and sustainability but reduced work hours would assist with achieving many of them. Imagine how much simpler and easier life would be if a standard full time job was 9 to 3 instead of 9 to 5. We can easily afford to do it — easily. It’s all about priorities.

Do we want to continue to slave away in order to feed the ever-growing financial sector or do we want more time to enjoy ourselves? Seems like a stupid question but it has already been answered for us and it’s not the answer we’d all choose.

Let’s continue the great Australian campaign that created the eight-hour day and push it down to six. We want it and we can afford it — but they won’t give it to us without a fight.